Use the form above to find your loved one. You can search using the name of your loved one, or any family name for current or past services entrusted to our firm.

Click here to view all obituaries
Search Obituaries
Immediate Need
We are here to help you. If you have need of our services, please call us, day or night, at:
315-637-3214
To better prepare yourself, we have provided you with some helpful information regarding the immediate need process.
Contact Us / Location

To share your memory on the wall of Janet Pizio Keenan, sign in using one of the following options:

Provide comfort for the family of Janet Pizio Keenan with a meaningful gesture of sympathy.

Janet is survived by her husband Doc Keenan; her son Michael Przestrzelski and grandson MJ of Lafayette; her daughter Mary Anne Gilbert (Dan), grandsons Stephen and Matthew of Lawrenceville, GA. Locally, Janet is also survived by her sister Marsha Pizio Cooke (Dave) and family of Jamesville; her brother David Pizio (Heather) and family of East Syracuse, and her sister Doris Pizio of Fayetteville. In Georgia, Janet is also survived by stepson Andrew Keenan (Jenifer) and family; stepdaughter Cynthia Elliot (Chris) and family; stepdaughter Katherine Greer and family. She is also survived by nieces, nephews, and 12 beloved grandchildren who she enjoyed spending her time with. Janet is predeceased by her parents Albert and Mary Pizio, sister Sharon Pizio Brown, and her son John Przestrzelski. Janet will be missed by all who were lucky enough to know her, and to know her was to love her.

Services will be held on April 6th, 2019 at Eaton-Tubbs Fayetteville Chapel located at 7191 E. Genesee St, Fayetteville NY 13066. Calling hours begin at 10:00 am, to be followed by funeral services at 12:00 pm, and continued with burial at White Chapel Memorial Gardens, honoring her wish to be buried next to her son, John.

Flowers may be sent to the funeral home or donations are asked to be sent to Gwinnett County Department of Fire and Emergency Services, 408 Hurricane Shoals Road NE, Lawrenceville, GA 30046 due to the heroic efforts for Janet on two separate occasions.
Read Less

Receive notifications about information and event scheduling for Janet

We encourage you to share your most beloved memories of Janet here, so that the family and other loved ones can always see it. You can upload cherished photographs, or share your favorite stories, and can even comment on those shared by others.

Posted Apr 06, 2019 at 02:01pm
I was so sorry...and shocked...to read of Janet's passing. I will always remember her as one among the most joyful people I've known! Doc, and family, my sincere condolences. She was taken away too soon.
Comment Share
Share via:
HS

Flowers were purchased for the family of Janet Pizio Keenan. Send Flowers

Posted Mar 29, 2019 at 01:02pm
Dear Keenan Family & Katie Greer, Thinking of all of you during this time and pray that Gods Grace & piece surrounds all of you at this time. 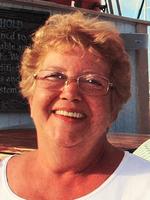